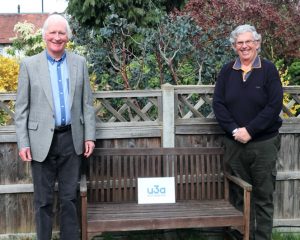 At the Annual General Meeting of Maidenhead u3a, Ian Ross has stepped down after serving as Chairman for the past three years and previously as  Group Co-Ordinator.  Ian is handing over to John Twydle who was previously Treasurer and is still running several interest groups.

Bought up in Uganda and Edinburgh, Ian studied German and French at Oxford.  He spent much of his career as European HR Director with American and Australian multinationals and has worked in every European country west of Rumania, including a year in Germany and two years in communist Poland.

Ian has given most thoughtful service and will be missed although we hope he will continue to attend some of the monthly u3a meetings and his chosen interest groups.  John gained a qualification as a radiographer at The Middlesex Hospital  during the seventies.  He then worked at The Middlesex Hospital and Royal National Orthopaedic hospitals Stanmore and Northwick Park in 1976 where he was part of the team operating the first body CT scanner.  Within the eighties, John moved into industry working in UK, Belgium and Switzerland, and had a successful career until he retired.