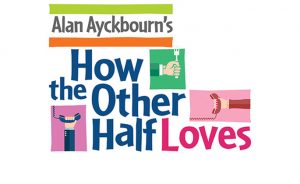 Following its critically acclaimed West End revival, Alan Ayckbourn’s hilarious tale of matrimonial mishaps and London’s funniest comedy of 2016, How The Other Half Loves, will open in Windsor before embarking on a national tour.

As Bob and Fiona clumsily try to cover up their affair, their spouses’ intervention only adds to the confusion. William and Mary Featherstone become hopelessly stuck in the middle, falsely accused of adultery and with no idea as to how they’ve become involved. The plot culminates in two disastrous dinner parties on successive nights, shown at the same time, after which the future of all three couples seems in jeopardy…

The star cast includes leading stage and TV actor ROBERT DAWS as ‘Frank Foster’, best known for the hit series’ The Royal, Outside Edge and Roger Roger opposite CAROLINE LANGRISHE as ‘Fiona Foster’ who starred in Lovejoy, Holby City and Judge John Deed. CHARLIE BROOKS, much-loved for her portrayal of EastEnders’ Janine Butcher performs as ‘Teresa Philips’ with LEON OCKENDEN, best-known for his role as Coronation Street’s Will Chatterton as ‘Bob Philips’. Completing the couples are MATTHEW COTTLE who reprises his critically acclaimed West End performance as William Featherstone, best known for the BAFTA-nominated Game On. Alongside him will be SARA CROWE as ‘Mary Featherstone’, who’s West End credits include Alan Ayckbourn’s Absurd Person Singular and The Constant Wife but perhaps is best known for her role in the popular film Four Weddings and a Funeral.