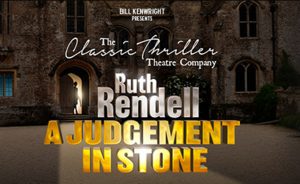 Eunice struggles to fit in. When she joins a wealthy family as their housekeeper the very reason for her awkwardness, long hidden and deeply buried, leads to a terrible tale of murder in cold blood – on Valentine’s Day. Ruth Rendell’s brilliant plot unravels a lifetime of deceit, and coverups which, when revealed, brings a shocking revelation almost as grizzly asmurder itself.

Building on the phenomenal decade-long success of The Agatha Christie Theatre Company, which sold over two million tickets and continually played to packed houses around the UK, Bill Kenwright presents a new production adapted from one of the most celebrated works of the writer often hailed as the successor to Agatha Christie. Credited with revitalising the mystery genre, Ruth Rendell was first published in 1964 her prolific output included film and TV as well as 80 novels.