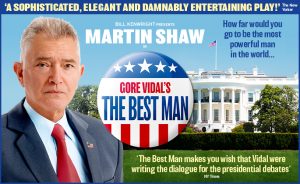 How far would you go to be most powerful man in the world?

Martin Shaw leads the cast in the timely UK premiere of Gore Vidal’s award winning play about the race to the White House.

Two opposing presidential party candidates are neck and neck in an unscrupulous battle for the nomination. The only thing that separates the ex-Secretary of State and his populist opponent is an endorsement from a respected ex-President. But where does compromise end and corruption begin? And who in the end will be proven to be “the best man”?

One of the UK’s best loved and most respected actors, Martin Shaw first rose to stardom in the late seventies in The Professionals, in which he starred as the hard-hitting Ray Doyle, launching a career that has hardly seen him out of the limelight since. He is best known for starring in the multi award winning BBC drama Judge John Deed and more recently Inspector George Gently.

On stage, his revelatory performance as Lord Goring in Peter Hall’s production of An Ideal Husband earned him an Olivier and a Tony nomination and the coveted New York Drama Critics’ Circle Award. Other West End credits include the acclaimed Twelve Angry Men, Are You Lonesome Tonight and A Man For All Seasons.